A blank sheet of metal does not look appealing nor is it properly protected against external influences such as corrosion or scratches. Powder coating is a process that enhances surfaces both mechanically and visually, by applying powder and curing it. Many everyday objects such as windows, doors, furniture, and facades are being powder coated today. Additionally, powder coatings can also be used for products such as industrial machines or for certain car parts. New innovations also allow nonmetallic surfaces, such as plastic, wood or glass, to be finished with powder coatings.

Powder coating describes the finishing of surfaces with powder coatings, which is done by electrostatically charging surfaces. After this the object is placed in an oven, causing the powder to melt and harden again. This process is applicable for both metallic and nonmetallic surfaces. Generally, the process takes place automatically along a conveyer system.

Powder coatings are dry mixtures, that generally consist out of four main components:

The binder makes up the basis of every powder coating and it determines key properties related to the desired surface as well as the thickness of the future coating such as:

Pigments are organic or inorganic colorants which are insoluble in the medium they are supposed to dye. They are evenly spread throughout the binder and grinded with it. Factors such as color, opacity, color strength and lightfastness are determined by the pigment that is being used. Contrary to that there are dyes that completely dissolve in the medium and thus color it.

Additives are substances that give powder coatings certain properties. Parameters such as flow, gloss, structure, and surface hardness can be changed. Additionally, further functional properties such as improved abrasion protection or optimized outgassing behavior can be achieved.

These substances give the powder volume and, thanks to their particle size, ensure optimum packing density (ratio between pigments, fillers and binders). Natural minerals such as calcium carbonate are being used as fillers.

1. Formula: No powder coating is like the other - just like the different requirements for powder coatings. Henceforth, even prior to production, the right recipe needed. This can be specially adapted according to customers and use.

2. Weighing: In the following step, the ingredients are weighted out correctly into a container. Differences in density and grain size do not play a role for the time being.

3. Mixing: The weighed raw materials are then being mixed both horizontally and vertically using a special machine. The speed of the mixing tool and the mixing time are precisely defined.

4. Extrusion: The mixture is now melted in the extruder. The aim of the extrusion is to create a homogeneous mass - this is achieved with heat and the shearing forces generated in the machine.

5. Cooling: After the mass exits the extruder, it is cooled on a cooling belt and rolled out. The solid mass is then being broken up into small chips by a shredder.

6. Grinding: In a first step, the now hardened, cooled extrudate is broken into rough chips (10 to 20 mm) and then ground into powder coating in the fine grinding step.

7. Sieving: Before the powder leaves the mill, coarse particles and fineparts are filtered out of the mixture using sieves and suction.

8. Filling: The finished powder coating is then filled by weight and packaged in airtight containers.

Due to its diverse properties, powder coatings are being used in a wide variety of industries and different markets. The main customers come from the following areas: 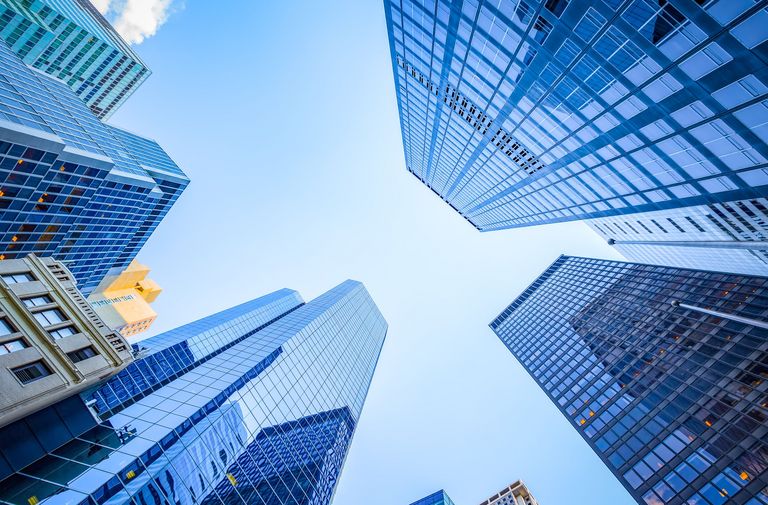 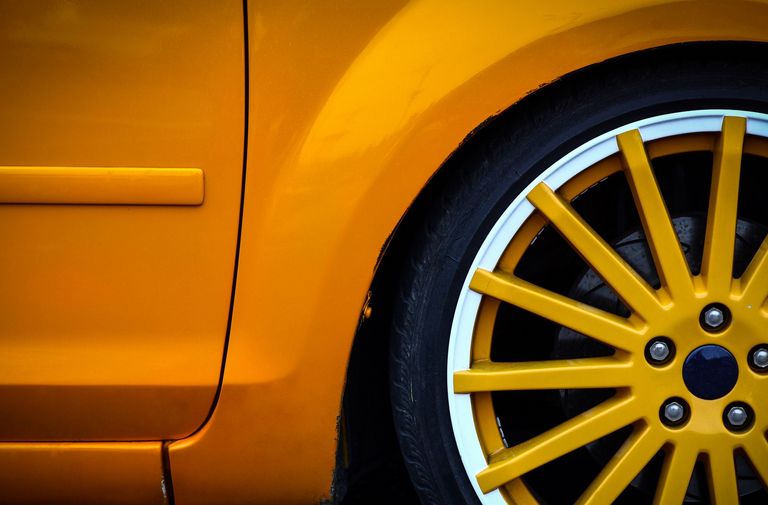 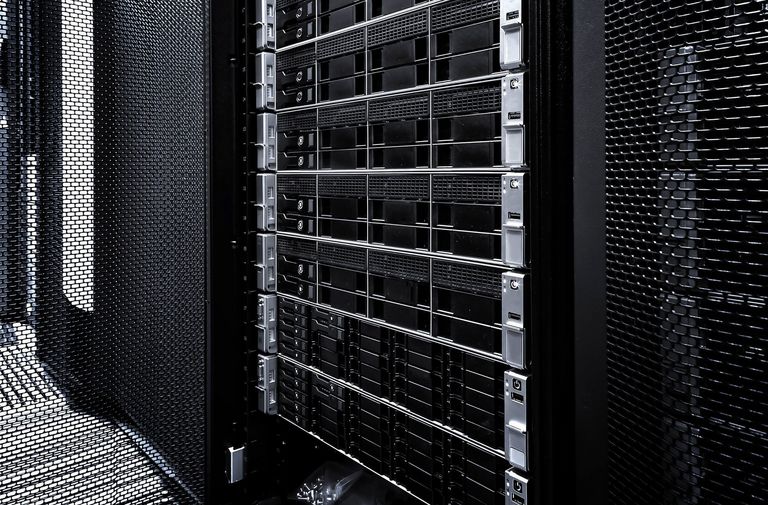 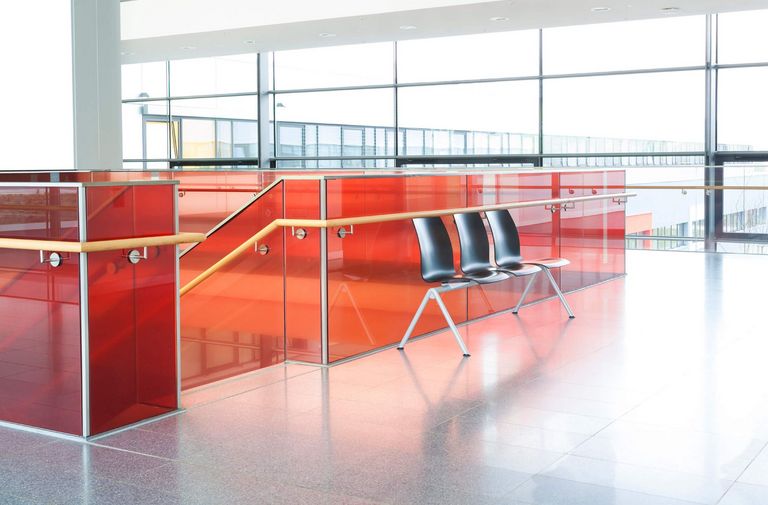 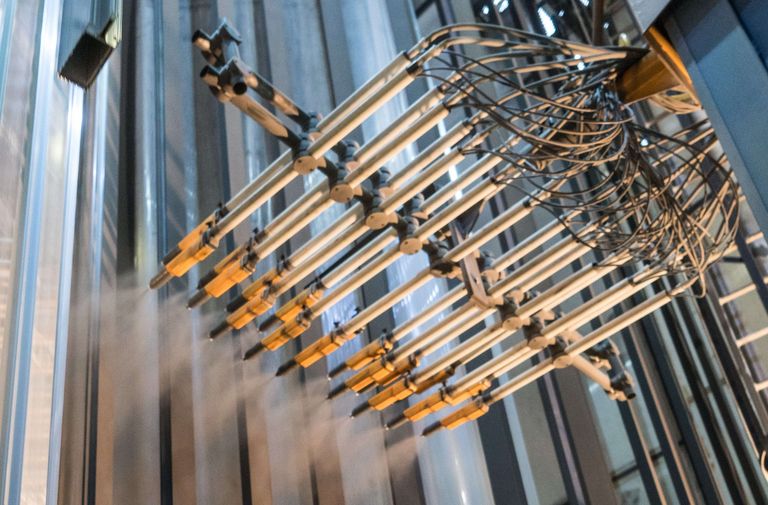 There are many step-by-step instructions for powder coating - the process can be split into three main tasks:

1. Pre-treatment: The substrate is freed from dust, scale, rust, grease, dirt and any oxide layers (for example on aluminum). There exist chemical and mechanical pre-treatment processes. In order to increase the corrosion protection and improve the adhesion of the powder coating a conversion layer is created on the piece during the pre-treatment. Following this the workpiece must dry completely.

2. Application of the Powder Coating: By using a powder spray gun, the powder coating is applied to the grounded surface. It is essential to avoid the entry of dust and dirt at this step. The powder spray gun creates a charged cloud of powder. As a result, the paint particles adhere electrostatically to the piece and form a layer.

3. Curing: The powder coating is then cured in an oven at temperatures between 110 and 250 °C. Various factors such as heating time and substrate thickness affect the final curing time.

Mistakes happen – also with powder coating. High-quality powders provide a good basis for optimal coating results. In order to ensure that the following steps won’t cause any types of mistakes, it is important for a coater to be aware of potential errors and to minimize risks. In our TIGER Troubleshooting Guide and our Youtube Playlist we have summarized the most common errors - including ways to fix them!

An overlook of the most common powder coating errors:

Powder coatings are available in all possible colors, different surface structures and gloss levels. Manufacturers often base selections on the RAL color system. In addition, unique effects can be achieved by adding special pigments. Popular effects include Metallics, Flip-Flop and Dormant powders.

Advanced development enables production of special powder coatings for specific requirements. These are for example:

Due to the differences between wet paint and powder coatings, there are applications, where one is more suitable than the other.

Powder coatings do not contain toxic heavy metals, are free of solvents and therefore do not release VOCs (volatile organic compounds) during coating or curing. This is also reflected in the CO2 footprint, where powder coatings have the lowest values of all available coating solutions.

This means that, unlike solvent-based wet coatings, powder coatings are inherently environmentally friendly and offer the highest quality as well as outstanding performance.

With the Green Deal in mind, TIGER is doing everything it can with its Green TIGER initiative to further increase the environmental performance of TIGER's powder coating products and drive the energy revolution.